Reshuffle In The Call Center Market of the EMEA Region

Noda Interaction Platforms has drawn level with Cisco and caught up with Avaya. According to figures from RBC.research, in 2013 Noda has increased its popularity in the outsourced call centre solutions market strengthening its position in the top three. In terms of the popularity of its product among call centers the Russian provider has caught up with Cisco, a western provider, and has come very close to the top position.

According to a report by RBC.research, 18% of call centres in Russia now use the Noda Contact Center solution (In the EMEA region Noda company known as NAUMEN). In terms of this figure the Russian developer has risen from third to an honorable second position, which it shares with Cisco. In contrast, Cisco has lost ground compared to the previous period (this figure has decreased from 25% to 18%, swapping places with Avaya). Apart from that, in terms of the popularity of its solution Noda is demonstrating the most remarkable growth among the top three in the Russian market.

In terms of the results of research conducted in 2013, distribution according to the implementation of solutions from a range of providers was based on information received from the total number of outsourced call centres. Some of these used solutions from different providers simultaneously.

Important: Noda Interaction Platforms has drawn level with Cisco and caught up with Avaya. 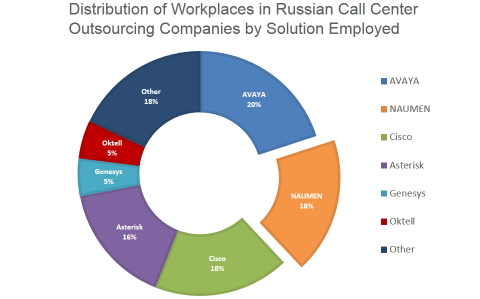 As RBC.research analysts have noted, based on their own assessment and information provided by market players, over the past year (from May 2012 to June 2013) the number of active work stations in outsourced call centres has increased by 30.4%.

“We believe that our success in increasing the market share is above all linked to the timely upgrade of the product portfolio and the market launch of the Noda Contact Center solution in 2013. This incorporates a lot of new important functionality for efficient call centre operations. Our new and existing clients have already appreciated the unique features of the solution, which allows call centres to optimize their costs,” says Alexey Sadovsky, sales director of Noda Contact Center in the EMEA region.

Another factor that influenced Noda’s market share increase was their entry into the international call centre market in 2012. That event as well as the news about the launch of the company’s first large project for 100 work stations in the Philippines increased interest among Russian call centres in Noda’s solutions.

“The current market disposition shows that we have every chance of drawing ahead of western providers and gaining overall leadership,” Alexey Sadovsky emphasised. “I’m sure we will succeed.”

The Marketing agency RBC.research (Consulting Department of RBC, http://research.rbc.ru) conducts research in all key business areas including field studies, desk marketing reviews, strategic consulting and business planning, etc. The company has been operating since 2001. It is a part of the RosBusinessConsulting Group.