As per the report, NODA strengthened its position in 2014, sharing the top of the podium with AVAYA: each vendor occupies 24% of the OCC market in Russia. CISCO’s share dropped to 18%. 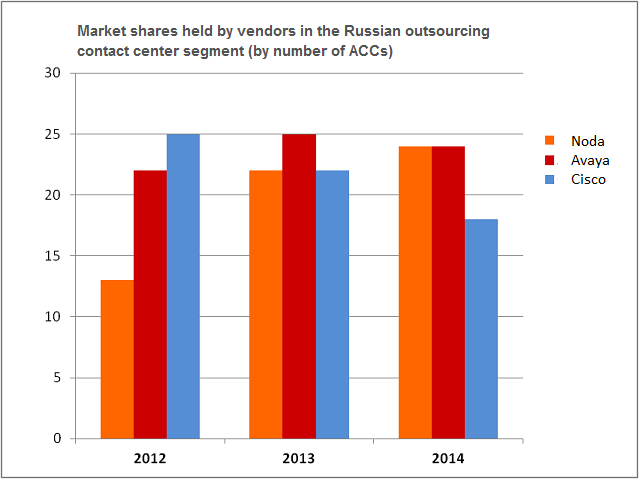 Analysis of trends in the market shares held by the leading developers of software for contact centers in the past three years (2012-2014) shows strong growth on the part of NODA, even as the company’s western competitors have faded. NODA now runs 50% of automated work stations in the segment.

NODA’s platform has historically been widely represented, being used by such major outsourcing contact centers as Gran, New Contact, IQ Line, Astra Page, and others.

The company’s leading position in the OCC segment is explained by its platform’s ideal combination of functionality, reliability, and cost. The product allows its users to handle just about anything an outsourcing contact center might need without requiring any addition development. In particular, the system’s latest release included Quality Management and Omni-channel functionality. The company counts among its latest victories the 2014 Crystal Headset Awards, where NODA’s awards shared the spotlight with those won by its clients: the Tyumen Oblast Call Center and Astra Page, an outsourcing contact center.

In 2013 NODA signed a partnership agreement with leading system integratos in the Philippines. That fact underlines the recognition enjoyed by the product for its functional and technological maturity on the part of a major players in the Asian-Pacific region, home to the largest share of the global voice outsourcing market.

RBC.research, a marketing agency and the consulting arm of RBC (http://research.rbc.ru), runs analysis for all key business areas, including field work, armchair marketing, strategic consulting, business planning, and much more. It opened in 2001 and is part of RBC Information Systems.