NODA projects have once again made it to the final round of the European Contact Centre and Customer Service Award (ECCCSA), a respected international contest held in London since 1996.

Starting form 2014, NODA has regularly taken part in the contest with its projects for Mosenergosbyt, Gran, Faster, OTP Bank, ERA Glonass and other large-scale companies

This year, NODA projects have made it to the finals in three nominations.

Moscow COVID-19 Helpline project has been included into the final round in two nominations:

A helpline facility seating 200 agents was launched in Moscow in early March, at the very start of anti-COVID quarantine measures introduced by the city authorities. The project was solicited by the IT Department of Moscow Government. Within the first week of operation, the helpline agents processed about 29,000 calls and filled out over 10,000 survey forms. Apart from contact center agents, the helpline engaged other professionals, such as health and social workers, delivery personnel, and volunteers. Due to their joint effort, Muscovites quarantined at home received medical help and had their sick-leave certificates delivered to their doorstep; the elderly and disabled citizens had their groceries and medications delivered, garbage taken out and dogs walked by volunteers.

"In a pandemic, government agencies have to take swift action. Our solution turned out to be just what was needed, as it could be deployed in a very short time. We managed to deploy the COVID-19 Helpline for Moscow residents in just 12 hours. This project served as a model for other Russian cities that promptly launched their own helplines. For example, in March a very similar helpline began taking calls from the residents of the Kransnoyarsk region. "

The project of implementing Noda WFM system at the Dodo Pizza contact center is also among the ECCCSA finalists. Before Noda WFM was implemented, about 15% of the supervisors' working hours had been spent on routine operations of arranging and rearranging schedules. Now making a schedule based on the number of calls and the need in agents takes from 5 to 10 minutes, and a monthly schedule can be compiled 4 times faster than before Noda WFM was installed.

"Noda WFM system allowed the company to streamline its workload planning. Now it is possible not only to optimize schedules, but also to trace customer behavior trends and analyze factors that might have caused peaks in the contact center workload. It is possible to view both the forecast and the actual data in a single screen. What's even more important is the new level of team interaction and team management. The schedules have become much easier for the agents to use, and supervisors have received an effective tool for real-time interaction and control. This is particularly important when agents work remotely. "

This year, due to coronavirus restriction, ECCCSA finalists will showcase their projects via an online platform. NODA team will make a brief presentation, followed by questions from the judges.The ECCCSA Awards Evening when the winners are announced will not be held in November as planned, but has been postponed till March 2021.

The European Contact Centre and Customer Service Awards (ECCCSA) is the leading European CX event held for 24 consecutive years. Last year, companies from 24 countries took part in the contest, and the Awards Evening hosted over 1,300 guests. 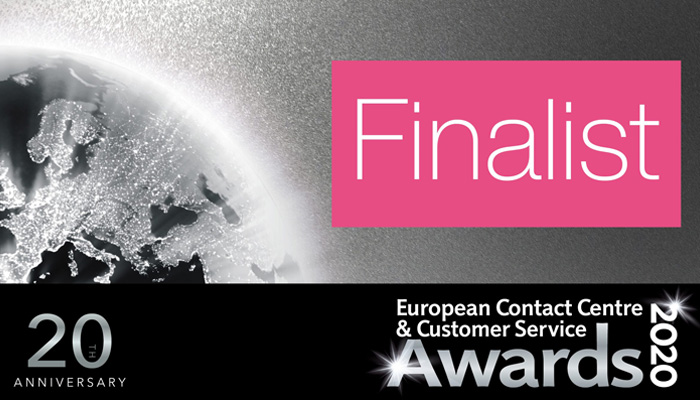