Consolidate your statistics from all subsystems

In addition to standard telephony statistics, the system provides users with an integrated report (see screen-shot) where they can see such information as:

Integrated statistics for all communication channels

All communication processing statistics are collected not only for voice calls, but for other channels as well (email, web chat, SMS).

Noda Contact Center allows users to create reports that vary in their form and comprehensiveness. The system additionally provides the ability to incorporate links to conversation recordings in any report. Noda can also fill out an automatic rating for all calls according to the degree they conform to set standards. The ability to automatically calculate FCR (first call resolution) deserves particular attention (see screen-shot). 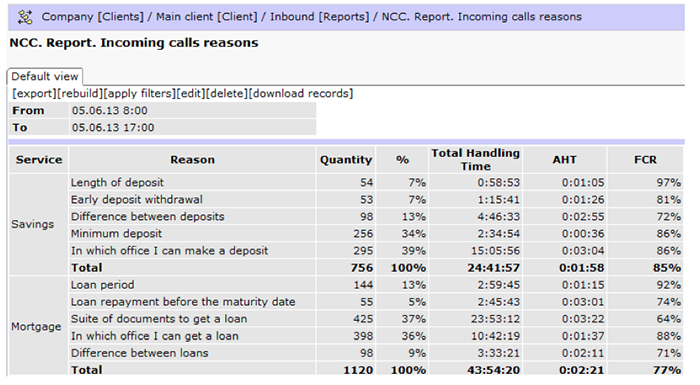 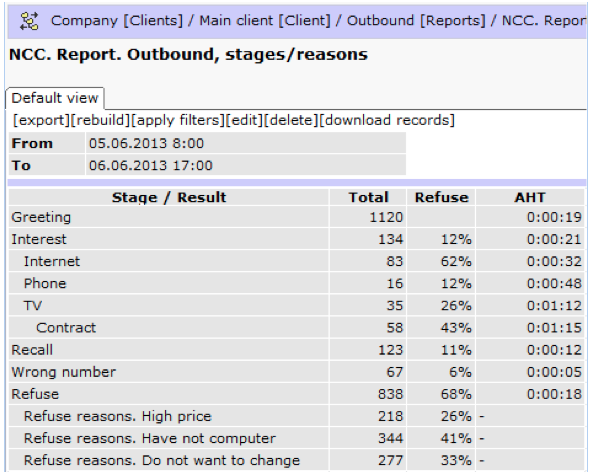 There are more refusals, seeing as how they can be come to in almost any form.

Analysis and segmentation Noda Contact Center allows users to determine the reasons for contacts in each client segment, categories that require more service time, the duration of contact processing, and the level of client satisfaction with the subsequent segmentation.

Analysis of the effectiveness of a given conversation script with respect to the time spent on each step, the reasons for refusal (at which step, after which words), etc. In that way supervisors can quickly correct the script, changing the steps where the most questions pop up. Such a feature is crucial for call centers, who work with a results-based format. Analysis and correction of scripts at the early stages of a project boosts the quality of work being done and the average efficiency of agents’ work.

Objective analysis of the reasons for calls being transferred to a second line When using Noda Contact Center, an analysis of transfers to a second line is run on the basis of the parameters the agent fills out in the profile during each call. This approach avoids subjective evaluations that occur when the agent records the most noteworthy reasons instead of the most common ones.

The company carried out an internet hookup sales project in conjunction with the biggest internet provider in Moscow. At the end of the first day after the project got underway, call center employees analyzed the reasons for refusals. Thanks to the use of Noda’s unified reporting system it was discovered that some clients were using a competing product that had gone on sale a month prior and had therefore not been taken into account by the client’s analysts when preparing the script. The rate for the competing product was 20% cheaper, and therefore potential clients where declining the offer being made.

This information was quickly passed on to the client’s specialists, who just as quickly adapted the script. At that point clients who were already enjoying the competing rate were made a tempting offer (free first month or free hookup) to switch to the new provider.

As a result, the number of refusals due to prior use of competing services dropped by 65%.

Agent compensation is determined on the basis of the following KPI:

All the listed indicators are compiled automatically and available in the integrated report. For some indicators a non-linear graduated model is used to calculate compensation. Automatically calculating KPIs significantly reduces administrative costs associated with preparing for and conducting reporting.

The direct, transparent, and easily accessible dependence of the agent’s income on the results of his or her work provides the agent with significant motivation to boost his or her effectiveness.

The number of incoming calls for a specified topic dramatically jumped after the rate for transferring money into one of the Asian countries was altered. The share of contacts for “rate information” grew from 12 to 26%, while the duration of processing for those calls grew by 40%.

The problem was detected within four hours, after which clarifying information was added to the IVR and agent scripts within two hours. This allowed the key indicators of the call center’s work to normalize over the course of 24 hours.

During the hours of maximum load Central Telegraph handed a part of their incoming hotline calls for questions in regard to signing up for an internet provider to the outsourcing call center. The initial work plan was based on an hourly payment system for outsourcing call center services. The conversion coefficient for the first month was 35%, down 3% from the results usually achieved by the client’s internal call center.

At the initiative of management the outsourcing call center agreed to a new results-based (per client who signs up) compensation plan with Central Telegraph, leading to an increase in the conversion to 50% in the course of a week.

One more interesting point is that the outsourcing call center’s specialists, after analyzing the reasons for switching part of the calls to a second line (to Central Telegraph), uncovered the underlying reason for the contacts: the agents did not have up-to-date information about whether the client had Wi-Fi routers in stock and therefore were not able to register applications if the client chose that router as an option. As a result, the agents lost clients (and therefore compensation) they just convinced to sign up.

The outsourcing call center manager and Central Telegraph coordinated up-to-date information about whether routers were in stock, after which the transfer rate to the second line dropped by 24% and the conversion rate grew to 65%.

Costs of
Noda's Licenses
Simply, conveniently, and quickly calculate the cost of Noda Contact Center licenses
Calculate...
Get a 60% discount on the licenses
Migration to the Noda Contact Center platform comes with a 60% discount on the licenses
Send Request
Send Request
Become a
Partner
We are currently looking for partners in the Asia-Pacific region
Contact Noda today